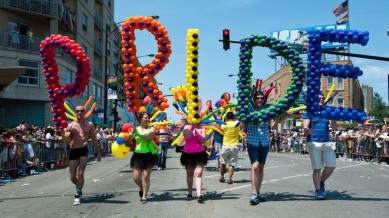 Here we are, heading into the second week of June, and I haven’t even started my Gay Pride Extravaganza shopping yet. It seems the holiday season just sneaks up on me somehow. In the Spring my brain is all anticipatory and abuzz with party plans and gift lists and then BAM! I’m midway through June without a single thing done.

I blame city planners and various retailers for my annual brain fade. Walk into any Walgreens or Target the day after Halloween and you’ll find a Christmas wonderland … shelves piled high with gift-wrapping supplies, greeting cards and decorations.  And on your way to the store, or wherever you might be headed, more reminders start popping up … twinkly lights in the trees, the appearance of banners wishing you a Merry or Happy anything but Christmas and clumsy attempts by the local chamber of commerce to make their traditional manger scene all inclusive. For nearly two months we’re bombarded with reminders of what’s coming and have no real defense for not being prepared.

As soon as the daytime temperatures break 70 degrees, you can find well-stocked shelves of sunblock, flip-flops and sand chairs.  But more than a week into June with no Thirty Days Of Gay accoutrements to be found hardly seems fair. And it’s not like suitable items are difficult to find … pretty much anything with rainbow colors will do.

There’s no hard and fast rule about celebrations or activities to commemorate Yay! We’re Gay! month. With holidays like Easter or Flag Day, families are likely to incorporate traditional elements that have been passed down for generations.  As families grow, change and blend, new bits and pieces find their way into the holiday schedule, while those that no one really liked anyway are dropped from the roster. So your cousin’s new husband who grew up in Ecuador contributes from his family tradition, and the practice of singing The Easter Parade with a mouthful of Peeps is retired due to last year’s unfortunate incident. RIP Grandma …

Families who can trace their lineage back to the Mayflower may still reenact the symbolic distribution of smallpox blankets at Thanksgiving; but there’s no family lore about how great-great-great Aunt Hypernia and a handful of brave gold miners led the first Gay Pride parade through Sutters Mill in 1849. And on Ancestry.com you won’t see little pink triangles popping up to highlight the chain of gay ancestors who eventually led to you.

We may be born gay, but for the most part we’re born to straight parents; and very few straight parents unfurl the rainbow flag each June on the chance that one of their brood will burst forth from the closet one day. Essentially, we’re all first generation LGBTers and need to figure things out for ourselves.

In some areas, much like Christmas has its trees, the gay season has its topiaries; and after an evening filled with fine drinks and a hearty holiday meal, everyone gathers around to trim the bush. In other places, June brings forth the carolers — groups of gays whose voices fill the warm night air with traditional songs like Meeting In The Ladies Room, I Will Survive, We Are Family and any number of show tunes. Typically, singing is more popular among the men, while the lesbians prefer to don their orange aprons and scurry about in the night like little Home Depot elves hanging shelves, re-grouting bathtubs, sodding lawns and doing all manner of projects and home repairs

You don’t have to be gay to be part of the fun and festivities. Everyone who’s not gay knows someone who is … and if you think you don’t, it’s much more likely that you just don’t know you know someone who is. Not everyone is as fortunate as me to live in a place and amongst people where feeling safe doesn’t involve hiding who I am.

The best gift you can give a gay person this month (or any month) is acceptance. Not a begrudging tolerance and not some “love the sinner, hate the sin” bullshit; but real, unconditional acceptance that, all else aside, we’re all just human beings on this planet trying to make the most of whatever hand we’ve been dealt.

Happy Gay Pride Month! Go forth and be fabulous!