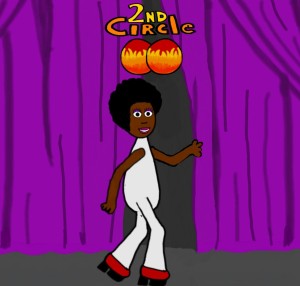 Well would you look at that?! I can’t believe it’s shameless self-promotion time again. The days sure do fly by when you’re trying to find a way to call attention to yourself and your non-blog projects without appearing to be even more narcissistic than you’ve already revealed yourself to be. Fortunately, it occurred to me that if I replace my egocentric blathering with genuine admiration and a glowing review of another person’s work, in which I just happened to play a small part, I can ride her coat tails straight to The Land of Hey Look At Me!

I’ve mentioned a time or two that in addition to blogging in spurts and dribbles, I also set myself up on Fiverr offering my services in an area for which I’m wholly unqualified — animation. At first the work might seem impressive; but that changes as soon as it becomes clear that it wasn’t produced by a four year old, but by someone who simply possesses all the artistic talent of a four year old … and not a four year old art savant; more like a four year old who spends the majority of her time in preschool appreciating the smooth texture and subtle hint of wintergreen in the paste she often eats.

So you can imagine my surprise and delight when people actually started paying for my animation Gig. Not that I’m out there making big bucks … in fact, I still have to wait for my PayPal funds to clear before I can do that hostile take-over of Pixar I’ve been planning. But it makes me feel productive and like I’m contributing something that another person needs. And, regardless of the fact that my drawings look like prehistoric cave paintings, it gives me an outlet for my creative energy when my blogging brain is broken.

But I think the best part is meeting people and working with them to create something together. And although I’ve come to understand that there’s no magic or sorcery responsible for the internet (probably), I’m old enough that I still marvel at all the things that are possible today, but simply didn’t exist during the first two-thirds of my life.

You can see the video here, but fair warning — the lyrics are somewhat risque and the animation features, among other things, an anthropomorphized vagina. So a bit of discretion is warranted if you choose to watch it at work.

Or at least there wasn’t before I got the chance to work with Sky Deep. Now I’m pretty sure that any day now my Fiverr account will start blowing up with requests from other EDMers looking to procure my primitive services for their projects. I just hope they’re not too disappointed when they realize it’s primarily due to Sky’s musical talent and editing skills that my animation looks at all like I know what I’m doing. And for that I am grateful.