A couple of weeks ago, I mentioned something about sharing a few excerpts from my 7th grade diary. A 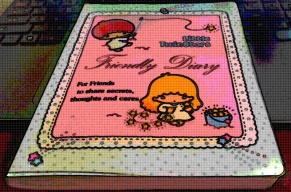 nd what better time to do that than on Anything Can Happen Sunday? So pop open a Tab, put on your Dittos and feather your hair, because I’m going back to 1978 and I’m taking all of you with me!

January 24
Okay! Total Freak Out to the max! There is no way that you will believe this! In a million years you couldn’t guess!

I’ll give you a step by step replay on the big event of today. Now picture this:
We are in the cafeteria, which is where we have drama. D says for me to talk to him. He says he has to talk to me about something important. So he takes me outside and he says – now listen closely, these are his almost exact words. “I know you’ll probably laugh about this, but do you want to go around?”

I couldn’t believe it!!! At first I really thought he was kidding, but he wasn’t! Now what am I supposed to do? I thought we were just friends. I don’t know what to say and I told him I’d tell him tomorrow.

It’s totally freaky. The other nite I prayed for someone to like me. I never thought God would fix me up with D. If he likes me I don’t want to hurt his feelings. That sounds so conceited. But I kinda wanna say “yes” because I feel like making out. How whorish.

For those of you not fortunate enough to have attended junior high with me, “going around” was our “going steady.” I have no idea why.

The girl is suppose to ask the guy so I went with D. They were having a thing where you got married for a nickle. They go thru all the stuff and then the kiss the bride bit. And I mean kiss! It should have been five cents to make out.

So I kissed D, el frencho. It was okay, so then we got married again. Like, there wasn’t shooting stars or magic or sparklers or anything. I guess it was nice, but I think I should do it a few more times to make sure.

I feel sorry for SP. Her and R got “married.” She didn’t want to french, but he did, so they did. Then she finds out that he “married” 6 other girls! RH is a user and a loser!

en you slow danced with them, and that they had no qualms about mashing their boners against you for the duration of “Stairway To Heaven.”

May 30
Well, me and D went behind the school. It was pretty good. We only kissed once but then remembered the Scholarship field trip bus was gonna be driving by there and SP’s mom would be on it. If she saw me she’d tell my mom.

So we were leaving and Miss W saw us walking out and she just goes “oooooh, behind the school!” Then we went to the outfield and kissed there.

I just want to give a shout-out to Miss W for being so cool. She knew where we’d been and what we’d been up to, yet felt no need to torture a with a lecture we wouldn’t have paid any attention to. She was totally rad!

July 5
Yesterday was the 4th of July, it was no biggie. This guy named N hangs around here a lot, he’s kinda ruff. I went to school with him before he got kicked out. Him and J like each other, and J’s got the hickey to prove it. I gave him a tattoo, first I scratched the design with a pen and then rubbed India Ink on it, and it won’t come off.

There’s this thing that studies space flying around, it’s call SkyLab. It’s gonna fall down out of the sky and it weighs about 750 or 750,000 tons. I hope it doesn’t hit our plane, because it’s supposed to fall around the same time as when we are flying.

I wonder how I found out about SkyLab’s actual weight. For that matter, how did we find out about anything before the Webbernet? A

January 2, 1979
Hi. I don’t have nuthin’ special to rite, I just felt like writing. Ever since I went to A’s party I want to do something like that with my friends. But I’m scared people will bring pot and beer. My mom says I can’t have a party with pot and beer. So I thought I’d put not to bring it on the invitation. But then I’m scared no one will come if they can’t get buzzed, which is kind of a bummer.

Ah, such an innocent time. In the not too distant future I would have agreed to the pot and beer restriction, but only because I preferred tequila and cocaine. The 70s were so magical.