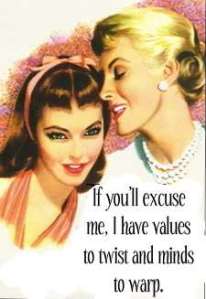 Have you ever forgotten something you know you know? Or failed to put two and two together because you didn’t have a calculator handy or, like me, you’re pretty good at readin’ and writin’ but are a bit ‘rithmetically challenged?

As I wrote in my Top Of The World post, I fully intended to come out to my family as a blogger … when the time was right. The thing that I knew but failed to remember I was aware of, is that my sister-in-law has recently increased her activity on Facebook, and since she and I are FB friends and I share my blog posts on my Timeline, the likelihood that she would see them was fairly high. So when she posted a comment congratulating me on being Freshly Pressed, my reaction wasn’t so much, “How the hell did that happen???” as “Yup, probably should have seen that one coming.”

The two things I neglected to put together, due to my inability to tackle complex problems in my head, are 1) my sister-in-law is a publisher author and 2) in Top Of The World I compared paid writers to prostitutes. I realized that remembering to remember these little factoids had slipped my mind when I saw her second comment on my Timeline:

Oh, and I didn’t miss the part where you called me a whore because what I write gets pimped out to make a few bucks 😉

The little winky emoticon told me she was just being silly and wasn’t actually offended … she knows I’ve always admired her and her work. And besides, considering the quality of her writing and her level of success, I’ve always thought of her much more as a high priced call girl anyway.

Inadvertently outing myself didn’t set off a race between me and my SIL to see who would be the first to tell the rest of the family. She may be out there on the mean streets and back-alleys hawking her words to the highest bidder, but like the proverbial hooker with the heart of gold, I knew she’d have my back. However, having someone in the family know my secret, someone whose opinion and abilities I respect, made the idea of telling my parents a little less overwhelming. So I made the call.

I told my mother that I have a blog, explained what WordPress is, what being Freshly Pressed means and that I had been Freshly Pressed. I said that I wanted her and my dad to know because they’d always encouraged me to write and I knew they’d be proud that something I’d written had been recognized. I told her I felt guilty that I’d been writing, on this blog and the one I’d had to abandon, but that I’d never told them because I wasn’t sure they’d like what I wrote about. But finally I said that if Margaret Cho could do her act in front of her parents, there was no reason I couldn’t be brave enough to share my blog with mine.

“Margaret Cho and her parents are Korean,” I told her. “And since you think you’re Korean, I figured that might be part of the key to acceptance.”

I may have mentioned in an earlier post that my mother is obsessed with Korean dramas … but that she is not Korean nor does she speak Korean. She’s able to follow what’s happening because her shows have subtitles. Mostly. And the subtitles are in English. Usually. Although I have come upon her watching programs that have no subtitles, or subtitles that looked like they may have been in Japanese.

“I get the gist of what’s going on by the music and their emotions and expressions,” she explained.

She also says that she’s beginning to understand a little Korean. “I know that omma is mother and appa is father and gaj or gad is ‘let’s go’ or ‘go away’ or something like that.” Which I guess is all the Korean you need if you’re watching a drama called Come Back Here Mom and Dad! or Get Out of Here Mom and Dad!

And it’s not just the soap operas, much to her delight she can also watch talk shows, movies and game shows, because for just an additional $24.99 per month, their cable company now offers the Korean Channels Package. Forget HBO and Showtime, at my parents’ house it’s all Korean all the time! During a visit not long ago I was heading off to bed when my mother stopped me because there was something on KBS World she felt I just had to see.

“It’s Superstar K4,” she said. “It’s like the Korean American Idol. My guys are going to be on. They’re so good!”

“Oh no,” she said. “I’m sure they don’t mean it that way. I think the lead singer’s name might be Richard.”

“Yeah, that’s probably it,” I agreed. “Richard being such a traditional Korean name and all.”

As it turns out, among the four band members there are three Kims and one Park, but no Richard. So perhaps they’re just a bunch of punks who also happen to be dicks and the band is aptly named. But they do a hell of a cover of Mika’s Big Girl and dicks or not, they really are good! For an aspiring Korean who’s turning 74 this month, my mom’s taste in music ain’t half bad.

We finally decided that the best course of action would be for me to email her a few posts that, with some slight edits, would best suit her delicate sensibilities. I settled on Story Time With The Baroness and Lost: One Mojo. I wanted them to read Mojo because it’s the post that got me FPed; and I thought swapping the phrase “fuck like monkeys” to something like “go at it like monkeys” would still work for them. Hell, if my mom can follow a Japanese-subtitled Korean drama using only music and gesticulations, I doubted Mojo would fall apart at the end from losing a single fuck.

She called the next day to say they’d really enjoyed my stories and to tell me again how proud they were of me. Emailing the posts rather than letting my parents run amok on my blog seemed like a good middle ground … I no longer feel guilty for not sharing with them nor will I feel the need to censor myself knowing they’ll be among my readers, and they’re happy to be able to read some of what I’ve written with the more cringe-worthy bits trimmed away.

“I thought these were really good honey, even though you had to edit them for us.”

“So you usually swear a lot more?” she asked.

“What about the P-word?”

My mom sighed with relief. “Oh thank goodness!” she said. “Because it’s like I’ve always told you — nothing makes a point or packs a wallop quite like cunt.”