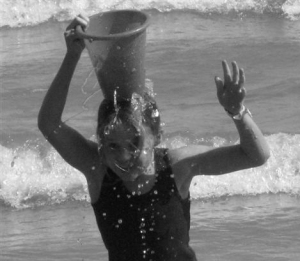 I don’t have a bucket list. There are places I’d like to visit or re-visit, and a few things I want to try, many of them legal. But if that last day comes and I haven’t done them all, I’m not going to flounce out of the room in a huff, declaring my entire life a waste of time as I slam my bedroom door, fling myself on my bed and die … either out of spite or because flouncing and flinging can be dangerous in one’s twilight years.

The idea that once one completes a rather morbid Activities Leading To My Eventual Death to-do list, he or she can “die happy” baffles me. I can’t currently think of anything that would allow me to die happy because whatever happy-making thing I was doing would be over-shadowed by how pissed I was when the dying part rolled around. Plus, if you’re a believer, I’m sure what awaits on the other side is far more spectacular than anything on your list. And if you’re like me and think death just ceases your existence, it won’t matter what you did or didn’t do, because now you’re just a sack of meat and bones.

And I know the TSA has its hands full racially profiling our friends of Middle Eastern descent, keeping the skies safe from full-sized shampoo bottles and ensuring that luggage-packing remains a solitary practice; but I think I have a right to know if some oldster on my flight is returning from completing the last item on his bucket list. We might have a fighting chance against hijackers, but the term “shit outta luck” comes into play if God decides to slap your plane out of the sky because Wrinkles McGee finally made it to Zihuatanejo.

I am not in the least bit interested in jumping out of or off of anything higher than a sidewalk curb. I can hardly stand to be in a plane long enough to get to New York, so exploring the world’s far flung corners has never much been an option. I have no desire to climb anything where part of the hike involves walking past the frozen bodies of previous adventurers who found the expedition a tad more taxing than they’d anticipated. Scaling peaks so high that even oxygen says, “Fuck that! I’m not going up there!” takes a special kind of crazy. Snorkeling gear belongs in sunny, tropical climes, not ones that routinely sends visitors home sans various fingers and toes that froze off.

On the highest peaks, the upper elevations are called The Death Zone. You know how poisonous frogs in the rainforest are brightly colored to warn predators that eating them is strongly discouraged? Naming a destination The Death Zone is the human equivalent of a frog saying, “You really don’t want to do this. Just walk away, buddy. Walk away.”

I’m thinking of starting a new list. Not an anti-bucket list … bucket lists are great and fun and motivating for those who appreciate such things. My list is more like the other side of the bucket list coin, the Yin to its Yang. And I’m sure I’m not the first, but for now I’m calling mine The Fukkit List. The way it works is rather than checking items off as you accomplish them, you add things to the list until it reaches whatever size it takes for you to just say “Aww fukkit!”

The lists would start with little things … Age 39, Found my first chin hair; Age 42, I’m still the same height, but I could swear my ass and my boobs are getting closer to the ground. And it’s not just a list for women, men can play too: Age 46, the love handles have completed their metamorphosis and are now a fully formed spare tire; Age 56, Need to lower the water in the commode; the boys took a dip when I sat down today.

Then one evening you’re out with your most fun-loving, happy hour rockingest friends when slowly, and with mounting horror, you realize that you and the girls are swapping your most hardcore stories of hot flash survival while the men in your group discuss the ups and downs of Viagra and Cialis. Or perhaps you run into a friend at the doctors office and spend a pleasant half hour comparing your various maladies. That’s right, I’m talking to you, my friend. You know who you are.

At some point, cataloging the discovery of every mystery hair, the punch to the gut realization that all hair can go gray, counting all of your parts that hurt for no good reason, talking about how little time you spend sleeping and which food you just can’t eat anymore, changed from casually observing the aging process to a full time job. The friend who was compelled to one-up me on almost everything, from boys kissed to bottles of Bartles & James consumed, was still at it.  This time the intensity apparently she has hot flashes so intense that she evidently spontaneously combusts every night and in the morning rises like a Phoenix from her ashes.

And that’s only a slight exaggeration. Last week I had a crazy, marathon hot flash. It was like someone had cranked up the thermostat to high and then snapped off the knob. I sweated for 3 solid days. It was gross and exhausting.

Eventually I suppose we all reach a point where we realize that we’re on the other side of the hill and picking up speed on the way down. I swear I reached the year without a period menopause indicator, went to bed one night and woke up the next morning 30 pounds fatter. Eventually stemming the tide of wrinkles, grays, lines, spots, sags and creeks is like trying to herd cats. It quickly becomes clear that you’re not the one running the rodeo.

I’m by no means thinking or saying that there’s nothing good left. I’m saying fukkit to the useless scramble to fight the inevitable. I’m saying I’d rather just deal with it now and get on with the rest of my life, without it hanging over my head with it all 10 or 20 years from now.

“I guess it comes down to a simple choice, really. Get busy living or get busy dying.”
— Andy Dufresne, The ShawshankRedemption

PS: But if they ever do find a real miracle elixir of youth, call me. I am soo there!