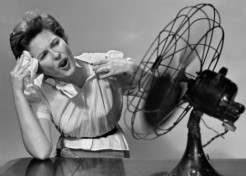 One day, when I was in the 6th or 7th grade, the boys and the girls in my class were separated and shown “the film.” The main thing I remember about “the film” was that it didn’t live up to the hype. Unlike Red Asphalt, the movie we were shown a few years later in Driver’s Ed and which was very likely the cause of more than a few cases of PTSD.

When you went into junior high, which is called middle school where I lived, you knew that at some point you’d be shown the puberty movie. The boys got information on boners and wet dreams, while the movie the girls saw was mostly about getting a period and how it didn’t mean you were dying. Had the junior high that Carrie White attended shared this little screen gem with its students, a few years later there probably would have been far fewer grisly prom deaths.

But, live and learn, right?

Of course we all know that menopause is something we’ll experience. So, I was fairly confident that I wasn’t pregnant when I stopped having a period (being a lesbian is awesome birth control), but I was somewhat surprised when it showed up again without any warning after a six moth hiatus. Remember those days when you had no idea when your first period might arrive, and just hoped it didn’t decide to make an entrance on a day you were wearing white pants? Get ready to re-live that time because your body might have a hard time deciding when your periods are really over.

Then there are the hot flashes — again, no big surprise. But knowing that you’ll have them does not in the least little bit prepare you for what they’re actually like. I had no idea that our internal thermostats are able to detect when we’re putting on make-up or doing our hair. Do you know what it’s like to put on make-up or blow dry your hair in a sauna? You will …

You can also expect to spend nights avoiding heat stroke by kicking off your blankets and removing any pajamas you’re wearing, only to find yourself shivering, cold and putting your PJs back on ten minutes later. All the while knowing that before long you’ll be doing the jammie striptease again.

As miserable and uncomfortable as the hot flashes can be, it’s somewhat balanced by the joy of never buying tampons again. And while you may not be prepared for what they’re like, at least you know that they they exist and you’ll have to deal with them. It’s the unanticipated changes that really throw you for a loop.

For instance, there’s the weight gain that occurs pretty much over-night. Seriously. I’m pretty sure I just woke up twenty pounds heavier one day. And do you know how to rid yourself of those additional menopause pounds? Neither do I. Neither does anyone. Apparently you just learn to live with the metabolism of a sloth. A lazy sloth.

And remember all the changes your body went through? Boobs sprung up out of no where, along with weird hairs growing where you really didn’t need any? Unfortunately, the boob thing isn’t going to happen again. But the weird hairs? Oh yes, that will happen.

Because nature can be cruel, your eyesight may get progressively worse right when you most need it to keep those weird little hairs at bay. At first, I just had to hold books and menus a little further away to be able to read them. Now my arms would have to be better than 5 feet long if I expect to read anything without glasses. And if I don’t have glasses with me, I can forget being able to see my phone, or anything else that’s not across the room.

Luckily, you probably won’t have to worry about the acne or break outs that came along with puberty. But it’s a little tough to be grateful for clear skin, when you’re obsessing on the crows feet and laugh lines that are getting worse by the day. You may also become more susceptible to buying any and all products that offer even a slim hope of reversing or slowing, those changes.

Sorry to be such a buzzkill, but I feel it’s my duty to inform others about what it’s really like on the other side of the hill. Besides, you know how when you read something like this and get to the end of the story or article, there’s always little something to give you hope or reveal that it’s not all bad?

This isn’t that kind of story.