Earlier this month I went to the Orange County Fair with a friend I’d briefly dated but hadn’t seen in a number of years. As we sat waiting for the All Alaskan Pig Races to begin she filled me in on some of what had transpired in her life since last we’d spoken. It seems that the woman she’d fallen in love with after we’d stopped seeing each other, and with whom she

thought she’d spend the rest of her life, had revealed five years into their relationship that she was transgendered and had decided to have sex reassignment surgery.

My friend told me how difficult this was for her and how she’d felt cheated and deprived as her girl-becoming-a-boy-friend began eliminating from their romantic repertoire certain sex acts with which she was no longer comfortable. “Touching her breasts was the first to go,” she said. “And then she limited oral to her giving but never getting. The more she took away the less connected I felt to her. It was like my feelings didn’t matter at all.”

It was at about this point that the man sitting in front of us turned and said, “Do you mind? That’s not really an appropriate discussion for a family event.” Now, I’ll grant you that most people would probably classify a 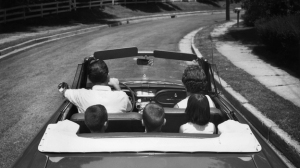 county fair as a family event. But here in Orange County, CA just about anything and everything qualifies as a family event simply by virtue of families, or more specifically children, being present. I believe this likely began on July 18th, 1955 at 10:00am PDT when Disneyland first opened its gates in Anaheim and the family-friendly phenomenon spilled out, slowly spreading until eventually the entire OC was covered by its gooey goodness.

Shopping at Target, going to the car wash, eating in a restaurant (hint: if they don’t provide highchairs, get a babysitter) … if a parent decides to drag their precious little darling (whose most traumatic life event to date has been to be asked if they want a time-out) with them to wherever I also happen to be, then I can look forward to meaningful coughing and throat-clearing, casting of the evil-eye in my direction and reminders that “there are children here” if I attempt to have anything even bordering on an adult conversation.

“Now hold on just a minute,” you may say. “By your own admission you were, in fact, at a family event. Was the impact of a female-to-male transgender transition on lesbian sex really an appropriate discussion to be having?” Perhaps not. However, at the time said discussion took place we were up in the stands surrounded by adults as the children were gathered below close to the track where the piggies were about to run. The closest kid was a couple of rows down, appeared to be about two years old and was inhaling funnel cake as fast as his mother could tear off chunks and hand them to him. If he overheard and comprehended our conversation and later develops some sexual dysfunction that takes years of therapy to correct because of it, I deeply apologize in advance.

I also like to add that after watching the little piglets (which are about the size of Dachshunds, have adorable Ritz Crackery noses and names like Ella Pigzgerald and Hamphrey Bogart) scamper merrily around the miniature racetrack, fans are handed coupons … for BACON!! That’s right, attendees get 25% off what could very likely be the crispy, delicious porcine athletes that performed at the Del Mar County Fair just a few months earlier. I saw some parents laughing about the coupons but none recoiling in horror at the possibility that little Unique or Euphonious might realize the happy little porkers they were just cheering on were destined to end up on the breakfast table. Based on reactions I’ve received at various “family events” versus those I saw during the bacon coupon distribution, children are more likely to suffer lasting emotional trauma from hearing me say something like, “You can put your silicone or Pyrex dildos in the dishwasher but it will totally fuck up the Cyberskin ones,” than from coming to understand that lovable, baby barnyard animals are routinely slaughtered for our dining pleasure.

“I don’t think our conversation is inappropriate, but you could go sit somewhere else if it bothers you,” my friend offered as a solution to the uptight fellow in front of us.

“And you could be more considerate!” he replied testily, turning back around and taking the hand of his wife or girlfriend or date or whatever she was. I’m not sure if the hand-holding was a gesture of reassurance and protection or if he grabbed it from fear that he was about to receive a humiliating beat-down by a couple of lesbians. For her part, she never turned or even glanced at us, just stared intently at the empty pig track below thinking, I assume, either, “My hero! Defending my honor again!” *swoon* or “Oh my God! Why does he always have to be such a douchebag?”

Not wishing to be hustled out of the stands, rushed to the fair exit at a breakneck 8MPH on the back of a golf cart security enforcement vehicle and have my name appear in the paper the next day under the headline “Lesbian Couple Incites Riot At County Fair,” because while the riot thing would go a long way toward enhancing my street cred, the couple assumption (and two lesbians together are always assumed to be a couple) would seriously curtail my getting laid opportunities, I attempted to calm the situation by redirecting the conversation to something more educational and relevant to the occasion at hand.

“Did you know,” I asked Douchebag/Hero, “That pigs have corkscrew shaped penises? And that is where we derive the expression Screw You!”