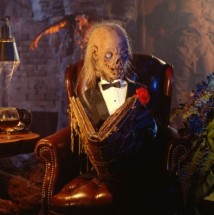 I can’t remember a time when I felt less my age than I do now. It wasn’t an instant transformation — I didn’t wake up one morning, remember it was my birthday and spend the rest of the day in the fetal position, sobbing quietly into my pillow. It’s been a more gradual change, an ever-increasing sense of doom, all wrapped up in layers of panic and denial.

It’s come at a bit of a surprise … my reaction, not my age. I’ve known for years that 50 follows 49, so I was prepared for that aspect of it. In fact, during last last couple of years in my forties, I would routinely give my age as 53 or 54. The thinking being that I might be holding up well for a 49-year-old, but I looked damn good for someone who was 54. I had no problem claiming to be in my fifties, but when I lost the ability to follow-up with, “Just kidding. I’m really 48,” that’s when the shit started to get real.

Being able to escape reality has always been one of the most useful tools in my arsenal of coping mechanisms. And I’d be able to put it to work now if it weren’t for all the reminders blocking my ability to forget what I don’t want to know. There was a time when a good night’s sleep meant popping out of bed the next day feeling refreshed and well-rested. Now opening my eyes in the morning isn’t so much about popping as it is laying there for 15 minutes trying to figure out which way I can move that will cause my back to hurt less rather than more. Fortunately, the aging package I got comes equipped periodic bouts of insomnia, so I don’t always sleep long enough for my spine to lock itself into a particular position.

Of course, after seeing a few rounds of my back and I trying to beat each other into submission, my knees decided they wanted in on the action. And rather than ambushing me in my sleep, they only require that I sit in certain positions for a length of time. For instance, I’m currently sitting crossed-legged on my bed as I write this. If I don’t stand up or stretch my legs every half hour or so, my knees begin to think this is a position they’d like to stay in forever; so they make it very painful to get up and walk, hoping I’ll give up and resign myself to remaining seated for the next 30 years.

Not wanting to be left out of the pain party, the ankle I broke almost five years ago … the one that was put back together with a couple of plates, a handful of screws and about half a roll of duct tape; the same ankle that healed so well I needed no physical therapy or after-care; the very ankle that never caused me any discomfort after it had healed, that ankle has decided that certain movements, like pressing a car’s gas or brake pedal, should be accompanied by an excruciating reminder that broken bones hurt.

While my back and knees just need a little time to loosen up and my ankle requires moving a bit more cautiously, my eyesight has gone all to hell and it seems that’s where it will be staying. In less than a year, I’ve gone from needing to hold books and menus and magazines at arms-length to accepting that, barring the acquisition of some Reed Richards stretchy-type abilities, I need glasses. I’m getting by on drugstore cheaters for the time being, but the fact that I need three different pairs to get by makes it clear that I can’t put off an eye exam much longer.

Speaking of glasses and being able to see clearly, let’s talk about my mom; because it seems that I’m becoming her so you and she might as well get acquainted. We’ve always been told that we look alike, but neither she nor I ever saw much of a resemblance. But now there are times when I look out the window and see her there, and just think to myself, “That’s not a window, dumbass. It’s a mirror.”

In addition to the strange trips through the looking glass, more and more often I’m hearing her words coming out of my mouth. Not like saying cawfee, dunkey and arange instead of coffee, donkey and orange (because apparently 50-plus years of living in California isn’t enough to overcome the incredible staying-power of a New Jersey accent), but things I remember her saying when she was probably the same age I am now.

Not long ago, a friend and I were lamenting our advanced ages and I heard myself say, “It’s so weird, because inside I don’t feel any different inside than I did in my twenties.” And I can remember my mom saying almost those exact words on more than one occasion. I’ve also found myself standing in front of a mirror with my hands on either side of my face, pulling the skin up and back toward my ears, saying, “It wouldn’t take much. Just a little tightening and I’d look 10 years younger.”

Fortunately, I don’t have a smart-ass daughter standing there saying things like, “But what’s the point? You’d still be old.”

I’m thinking this Sunday, in addition to dinner and flowers, my mom will be getting a long-overdue, much-deserved apology.