I’d love being the only one to have experienced some event or occurrence, so when someone interrupts my story to say, “I know how you feel. Something like that happened to me,” I can dramatically put my hand to my forehead and say, “That’s not the same. It’s not the same at all. The person in front of you only had eleven items! The one I was trapped behind had fourteen. Fourteen!” Then I’d clutch my pearls and say, “My heavens! I do believe I’ve got the vapors!” just before I collapsed onto that fainting couch I keep meaning to buy.

I’d also love to have the Publisher’s Clearinghouse Prize Patrol show up at my door. But that’s probably not going to happen. Although, when the doorbell rings unexpectedly, I do cross my fingers and hope it’s them. But it’s mostly just the Jehovah’s Witnesses. Not long ago, I discovered that if you open the door rather than muting the TV and hiding behind the couch until they leave, they give you a prize. The first time it happened I was surprised and thought, “What kind of church runs around handing out Jethro Tull CDs?”

But it turns out The Watchtower is the name of their magazine … which has absolutely nothing to do with Jethro Tull whatsoever. It’s all a bit confusing. And with Prince being a JayDub, they could at least call their publication Raspberry Beret or Little Red Corvette or something.

Occasionally it’s some Mormon recruiters out on that walkabout, adventure race thing they do, but they don’t give door prizes. And those JWs magazines start looking pretty good after you’re left high and dry by the Mormons.

In order to have unique and exciting experiences, a person generally needs to live a unique and exciting life. At least more unique and exciting than watching TV and hiding from Mormons, that is. And I suppose similar logic also applies to the Publishers Clearinghouse … I can cross my fingers all I want, but I know the odds of me winning are probably somewhat reduced compared to people who actually enter the Sweepstakes.

Come to think of it, that might also explain why I’m not seeing any results no matter how often I watch my Pilate 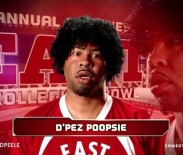 This whole thought process was kicked off when I caught a bit of an athlete’s interview on TV. From what I could tell, he plays a game that involves teams and a ball of some sort. And I can’t be sure, but his name might have been D’Pez Poopsie.

He was talking about a couple of pivotal points in his life, and said that had he taken other action or made different choices, he didn’t believe he’d be where he is today. Then he gave a shout-out to God because his success is only a result of God’s will for him, so I had to change the channel.

It just annoys me that with everything going on in this world, athletes continue to be like, “Hey God, I know you’re busy with all the death and suffering and miracles and all; but, if you could just swing by my game later and give my team a bit of an advantage, I’d really appreciate it.”

They already have all the money, now they want God to play favorites, too? Hasn’t He already done enough just by giving them all that athletic ability? Maybe they should rely a bit more on that talent, and less on hoping God shows up to smite the other team.

Sorry about that. Some things just trigger my ATT (Adult Tangential Tendency) more than others; and God-hogging is one of those things. Which I find odd since I’m an atheist.

Anyway, similar to the guy being interviewed, there are a handful of experiences from my life that I consider pivotal. And not generalized times like “the 6th grade” or “when I worked at that place I hated,” but specific decisions, actions or set of circumstances when my life essentially yanked a hard left.

As I’ve been going through my old diaries and journals, I’ve run across a couple of entries about those moments. Not going back to analyze the event after realizing its impact, but descriptions of what happened within hours or days of the occurrence. And what I’ve found, is that at the time, I wrote about it as just another thing that happened. I might have thought about it as interesting or unusual enough to mention, but there are enough entries about the weather or what I ate that day to make it fairly obvious that it doesn’t take much to make me think something is diary-worthy.

I’ve found that my memories of what actually happened are fairly accurate. But after years of pointing to that day or that conversation as when my life took a weird detour, I assumed that I recognized it as a game-changer when it happened. And that’s just not the case. I might have found it unusual or different, or at least more exciting than my food and weather reports, but there’s nothing that implies I saw its true importance at the time.

And that has led me to wonder what things, if any, in my current life or recent past might one day be added to my Significant Events List. The last four or five years have been rather colorful and I know that  some of what’s happened will affect aspects of my life for years to come. But that’s a more of a combination of factors, and not the result of a single event.

And that leads me back to leading a more interesting and exciting life. While it would probably give me more opportunities to make use of that fainting couch, as often as not the things that ended up being pivotal were fairly basic and mundane. And the things that were interesting and unusual at the time, pretty much blew their whole wad when they happened and, aside from making great stories, didn’t mean all that much.

For instance, I went through a stretch when I developed not exactly a super-power, more like a temporary ability, where I could make people in uniforms appear just by drinking enough Jack Daniels. Once I thought I had a legit super-power when I suddenly found myself in a hospital E.R. with no memory of how I got there. But the doctor said it was more likely due to a blackout and that I hadn’t actually discovered the secrets of teleportation. And they said the same thing the next time I woke up there. But come on … once is a coincidence, but twice?? You can’t tell me there wasn’t at least a little teleportation going on.

Whiskey never gave me the ability to time travel; but if ever acquire it, I’m going to go back to the E.R., find that doctor and see if he still refuses to acknowledge the obvious magical properties of Jack Daniels.